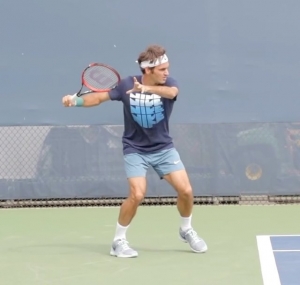 A few days ago, I found myself watching a post-match interview with Roger Federer a/k/a God. I attend to his comments the way a spiritual seeker listens to a mountaintop guru.

And God said, “I was tactically unsettled in this match. I wasn’t sure when to hit a rally ball, and when to go big.”

Whereupon Grasshopper got still and contemplated the words of the Master. There are rally balls, the waiting for an opening, and then there is going for the kill. Point over! One way or the other. It’s the difference between the picador annoying the hell out of the bull, and the matador applying the coup de grâce. Federer’s distinction wasn’t new for me. But God’s comment caused a question to pop up in my mind. ‘In terms of technical stroke execution, what is the difference between hitting a rally ball and ‘going big,’ as per God?

As soon as I asked the question, it became clear to me that the difference for most people is quite straightforward: You swing harder. Technically speaking, this is, I believe, an error, or not so much an error as a misunderstanding based on a sort of perceptual and linguistic vagueness. Yes, you do swing harder—but when? And how? Do you swing harder or do you strike harder? The distinction is subtle but crucial.

At pretty much every level, success at tennis is a function of steadiness and consistency. The person who gets the last ball in wins, after all. At the 3.0 level, this might mean getting the last patty-ball in. At 4.5, it means making the shots you should make 80% of the time. At God’s level, it means being able to go big after a 30-shot rally. Consistency, in turn, is based on replicability. This is why practice makes, if not perfect, excellent—when you repeat a desired motion over and over, it gets embedded in your muscle memory. What this suggests to me is that a player will get better faster if they don’t have two entirely separate stroke sequences to practice, the rally-ball sequence and the going-big sequence. It’s easier to perfect one swing than two.

This led me to my next question: What does God do when he goes big? I watched tape of him hitting, and concluded that he changes one thing only from his standard rally-big sequence—he strikes the ball more aggressively. This is different from swinging more aggressively. Within the full arc of an individual stroke, there is what might be called the existential moment, the span of time that is perhaps one-sixth of the entire motion when we explode the wrist and forearm into the ball and let the momentum carry the racket into a full follow-through. That is the span that makes all the difference, the very brief interval on either side of the moment when the racket makes contact with the ball.

Imagine a snake, coiled and ready to strike. It is still; it is focused. The strike, when it happens, is ferocious. All the snake’s energy and power is contained in stillness—then it releases. Going big in tennis is like that. It unfolds within stillness in a narrow time interval.

One of the reasons Roger Federer is such a joy to watch—and also a reason he’s been so successful—is because he disguises his shots so well. This is true for his serve, which is only so-so in terms of raw power, and it is also true for his forehand, where he can go big from out of nowhere. The reason for this, I’ve come to believe, is that more than most players, elite or otherwise, he hides his shifts from the norm within the snake-strike of that last brief moment. His wide-slider serve is unreadable because the only things he alters are his wrist action and angle of contact on the ball, and these two shifts occur in that last phase, too late and too imperceptibly to be picked up by the opponent. Similarly, his ‘going big’ forehand looks just like his regular one, except for the fact that, inside that existential moment on either side of impact, he’s giving it an extra 10-20% of explosiveness with his forearm and wrist muscles.

Note to self: Your rally-ball stroke is your primary stroke. Going big is no different except for this one thing: Increased pace, increased commitment—increased snake-strike commitment—during that existential moment. 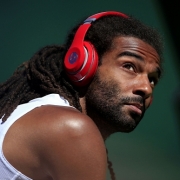 Your Path Is Your Pathology
Scroll to top