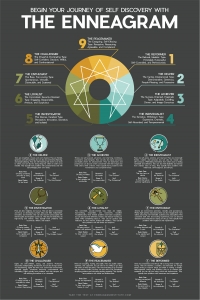 We are mind and body. But it is not only our thoughts that affect how our bodies act and react. So do the higher-level patterns that define our personalities, that make us relatively hot-blooded or cold-blooded, compassionate or punitive, detached or engaged. We are mind, psyche and body, and the three are linked in a feedback system that is enormously subtle and complex.

Your personality is a mix of better and worse tendencies. This statement isn’t directed at you personally; it’s a statement about personalities. Positive traits tend to have a negative flip side, and vice-versa. In a personality typology called the Enneagram, I am a number five, variously called the “Witness” and the “Observer.” A key component of my psyche is detachment—I tend to approach things from the point of view of the outsider whose first impulse is to watch, not do.

The strength of being an Observer is analytical clarity. To the extent that I am dispassionate, I can see things free of emotional biases. The downside is that it can produce an unhealthy dissociation between the processes of observing (an activity of mind) and the processes of doing (an activity of body). It’s never good to get stuck in your head, and that’s never more true than on the tennis court. You can’t control a tennis ball with your noggin; it’s not the right tool for the job.

Self-knowledge liberates. When it became luminously clear to me how much I’m inclined by dint of simple personality to confuse imagining my body doing something with actually doing it, I was a handed the key to stop doing it. Among other things, this has helped unlock my second serve. I hit a twist second that is effective in direct proportion to the extent to which I commit to it. (There’s a paradox here that surfaces again and again in tennis: The less careful you are, the fewer errors you’ll make.) I’m much more inclined to arm the ball into the net if I guide the racket rather than throw my arm and body into the ball. Now, as I prepare to hit my second serve, I go through a little mental ritual. I have a little chat with myself that has been custom-designed for my Witness self. My observing mind reminds (orders, really) my physical body: “Engage. Embody. Just Do It.” And my body listens. Over time, my second serve has gotten steadily stronger and steadier, in large measure due to this mantra.

Other personality types will encounter different challenges. An Enneagram 8 (the Boss, the Dominator) might have to dial back their tendency to power their way through every challenge. An Enneagram 2 (the Helper) might need to actively practice getting comfortable with dictating, dominating.

Who you are tells you what you need to work on. Your path is your pathology.